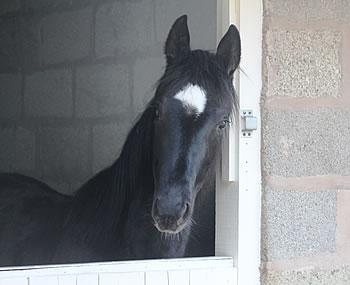 Mia is a very pretty and sweetnatured filly by Sir Donnerhall out of a lovley Oldenburg mare Monik. She has real presence and ‘look-at-me’ quality. Her top line is particularly good with a fabulous neck that arches naturally into an outline. Her trot and canter have huge suspension and power – she can canter on the spot; her walk has a large over track. She is a relaxed inquisitive horse who has great courage – she is literally afraid of nothing – she loves people and water! Her sire is the Champion Oldenburg stallion Sir Donnerhall, and her dam is a registered Oldenburg mare who combines the coveted De Niro blood with that of Olympic eventer Volturno.

His sire Sir Donnerhall, was the 2006 National Young Horse National Champion and Reserve World Champion. In his 30 day test he won in all three gaits with top scores between 9.0 and 10.0; and a 9.5 for rideability. At his winning 70 day test in Adelheidsdorf he was awarded the highest dressage score ever awarded to date of 163 points. Unusually he also won the jumping category, achieving a total jumping index of 151 points. His movement has been described as ‘featherlight’: his trot is so light and graceful it swings through his whole body and his canter is wonderfully elegant and yet full of jump and he has exceptional presence. Sir Donnerhall's pedigree is the perfect combination of genes from Sandro Hit and Donnerhall and he is out of the "Brilliantring" mare Contenance D and he is building an excellent reputation as a breeding stallion.

Three of the ten best colts at the 2006 German Foal Championship were by Sir Donnerhall. In Munster-Handorf, Vechta, Schwaben, Munich-Riem and at the A.O.S. auction, his foals were the most expensive. In 2009, he produced the North Rhine-Westphalian champion stallion Silbermond, one of his sons sold for the highest price of EUR 195,000 at the Hanover auction, he produced two of the premium stallions in Oldenburg and his progeny also include valuable horses such as Sonnenreiter, who sold for EUR 120,000, and Sir Rubinstein, who cost EUR 105,000. The popularity of Sir Donnerhall's offspring was already evident back in 2008 when Schickeria sold at the North Rhine-Westphalian Elite Auction for EUR 355,000 and Sankt Hülfer received the highest bid at the Vechta Auction of EUR 300,000. Sir Donnerhall's first crop of foals includes South German champion stallion Sir Nymphenburg.

Monik is a beautifully bred jet black Oldenburg mare. Her sire is Champion Grand Prix stallion De Niro, and her dam is by the German Olympic 3-day event sire Volturno. She has three eye-catching paces: a huge walk, a powerful yet floating trot; and an expressive canter. She is an angel to handle and produces well-adjusted foals with a super outlook on life. Her foals have beautiful type with fine intelligent heads and a real ‘look at me’ quality.

Paternal grand Sire Sandro Hit, who needs no introduction, has started a new dynasty in the world dressage scene and is rewriting sporting and breeding history.